In the beginning, we created the wax paper and the foil; and the wax and the foil were without form and void; and darkness was on the face of the aluminum; and the Spirit of Glad said, "Let there be life!" and there was life. Behold! It is good!

Archive for the category “David Boone the Thespian” 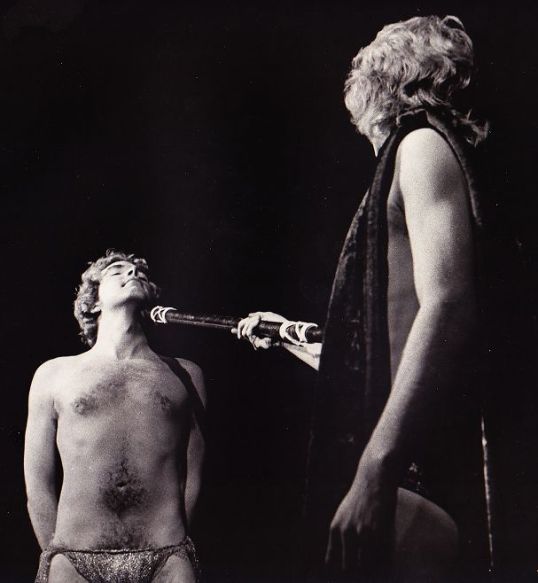 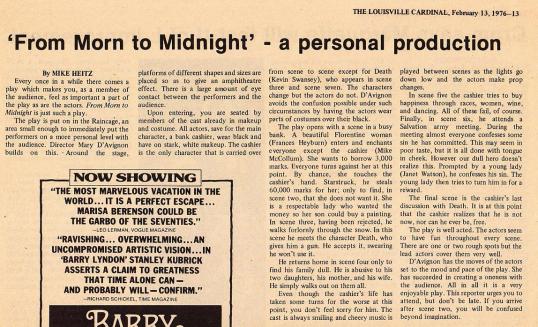 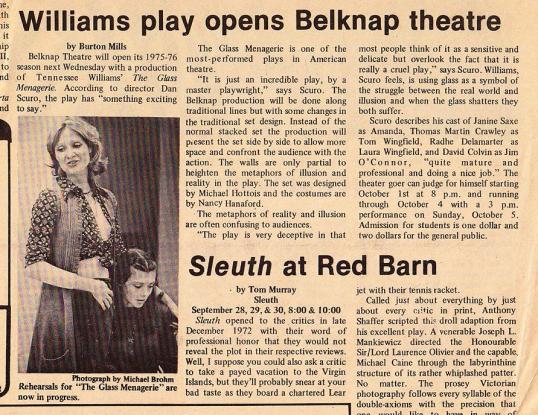 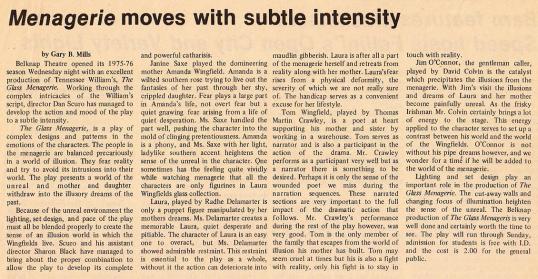 Posted in David Boone the Thespian | Leave a comment

Review of “Boys in the Band”

Like Edward Albee’s Who’s Afraid of Virginia Woolf, which is referred to rather self-consiously in the course of Crowley’s play, Boys is a scathiing screamer, but unlike Albee’s play, which deftly probles neurotic, complex characters, Crowley’s depiction of a birthday party turned into sick game time for a homosexual man given by his gay friends throws up characters who come perilously close to being stereotypes. Yet Boys, despite its mishmash of biting comedy and shrill melodrama, is a good vehicle for solid talents which may transmit a delicious intensity to audiences.

A good group of actors effectively mounted an exciting production of Boys in the Band in [University of Louisville’s] Raincage Theatre. Director Sharon Black picked and guided a basically strong cast in a fast pace well suited to a show unable to bear too much scrutiny, and she wisely avoided pouncing on profundities which prove to be potholes. With the assistance of Thomas Martin Crawley III, Ms. Black crafted a highly impressive and detailed set through which she blocked her actor’s movements deftly. The effective staging was enhanced by good light design from Forrest Black.

Thomas Crawley, as Michael, the bitter, self-torturing homosexual who lashes out at others in his pain, turned in an arresting but slightly flawed performance. Crawley projected his character well, but started the show with such hostile bitterness, giving way only infrequently to sadness, that he scarcely left himself room to build up to the harrowing vicious drunkeness of Act II.

Yet, he managed to bring his nastiness to quite a frightening pitch and displayed a chilling breakdown at the end as Michael realizes what he has done to himself and his victims. His final quiet lines were well delivered. What detracted most from Crawley’s otherwise fine performance were some very stagey mannerisms inappropriate to intimate theatre – for instance, a thumb pressed behind the front teeth is overdone angst at close range.

Jeff Sturgeon gave a fine performance as the neurotic, bookish Donald, who acts sympathetically for Michael at the beginning and end of the play. Sturgeon portrayed the sympathy needed for the heinous situation Michael creates.

Ed Dunstall took the hyperbolic role of Emory, the screaming queen, who incurs the wrath of Michael’s straight college friend. Emory, though a flaming fairy, is not without his moments of pathos and caring for others; in this effeminate role Dunstall drew out these elements very well. His building of Emory’s revelation of love for an older dentist was nothing short of superb.

Marty Polio started out unsteadily as Larry, the promiscuous lover of bisexual Hank, but recovered soon enough in his re-acquaintance scene with Donald. In Act II, Polio clicked into his role of being jealous and loving of Hank at once, making his promise to try again with Hank ring with pain and sincerity.

Jeff Atik, as Larry’s lover Hank, also began shakily with some apparently unconscious movements at odds with this rather stiff prim character, but he built his jealousy over Larry’s infidelities well and did a fine job of projecting concern for the troubled Alan. His monologue describing his momentous initial homosexual encounter was quite good, and he believably suggested the pain felt by a character who leaves his wife and children for a male lover upon realizing his true sexual nature.

Bernard, the black homosexual, received shaky treatment from Warren Frelot, who postured instead of acting at the beginning of his performance. But when in Act II Bernard calls his former employer at the cruel prompting of Michael to admit his love, Frelot was at his best in handling the put upon nature of his character. Yet at no point did he meet Michael’s sadistic taunts with nearly the anger and self-defense one would have expected.

David Boone, as Alan, the straight college chum of Michael, projected his reserved yet tormented role extremely well. Although far from being complex, the character of Alan contains an enigma not evident in the gay roles. Even though Crowley heavy-handedly suggests in the lines of Michael that Alan has left his wife briefly because Alan is a latent homosexual, Boone introduced enough restraint in his performance to make the suggestion, once blatantly stated, a shocking revelation to Alan.

Don Bullington adequately conveyed the shallowness of the muscle bound birthday gift for Harold. Bullington portrayed the gorgeous dumbness of the Cowboy well but did not quite project enough sympathy for Emory or the others in the horrible events of Act II.

The tough fey part of Harold, the Jewish birthday boy, was extremely well-played by Galen Logsdon, who focused the cool menace of his character quite well. Cutting only when he had to be, Logsdon’s Harold was a formidable match for Crawley’s rampaging Michael. But in the scene where Harold administers the coup de grace to an already reeling Michael, Logsdon could have shown a trifle more concern for Michael underneath the quiet tirade.

All told, the cast worked extremely well as an ensemble; with effective and careful direction, the group of actors for the most part managed to make their shallow roles believable and engaging. The success of Boys in the Band rests not in any virtue of the play but upon the talents of its production crew. And in this case cast, director and crew steered the vehicle to an impressive, exciting opening of the Raincage’s 1976-77 season.